Modern art and tapping sticks: The transition from aboriginal, to simply art.

I like Aboriginal Art. I like it so much I have even considered buying some to decorate a wall in my rented 3 X 2 house in Vic Park. During one of my more recent forays into the art realm, I saw Gunybi Ganambarr accept his prize as winner of the 2012 West Australian Indigenous Art awards. Ganambarr sang shyly for a conspicuously white audience, simultaneously beating away with two wooden tapping sticks.  He faced the murmuring media assembly before him; head down, shoulders slouched, hands tucked deep into his pockets, whispering low responses to his agent-cum-translator. I watched the entire display with considerable interest and growing contemplation. I wondered what Ganambarr was thinking. I wondered what he would make of his ochre, bark and acrylic creation hanging on a stark bleached wall in the WA Art Gallery, or what he would do with his $50,000 in prize money. At this very point in my aboriginal art education I had limited views. I imagined ‘aboriginal art’ encompassed only the melding of earthy red and brown dots on natural canvas, figures of snakes and stick men decipherable within a dreamtime scene. I had not considered that artists like Ganambarr possibly felt incensed by the fact that their artworks are constantly branded as ‘aboriginal’ and seldom seen as artworks in their own right.

The characterizing of art in terms of an artist’s ethnic grouping is transitioning. The grouping of ‘Aboriginal Art’ as distinct from all other forms of art is being seen more and more as hailing from a time when the Federal Governments’ White Australia policy was a real and established program and  “aboriginality [was] constructed as other, as in perpetual dichotomy to the Western norm.”[1] More recently ‘aboriginal artists’ have spoken of feelings of antagonism caused by pigeonholing of their artwork. Arguably the most famous artist to vocalize his objection to the categorization of Aboriginal Art is Richard Bell, winner of the National Aboriginal and Torres Islander Art Award. Bell’s stance that aboriginal art is “controlled” by westerners is as famous as his award-winning paintings. He is most often quoted as saying: “Aboriginal Art has become a product of the times. A commodity. The result of a concerted and sustained marketing strategy, albeit, one that has been loose and uncoordinated. There is no Aboriginal Art Industry. There is, however, an industry that caters for Aboriginal Art. The key players in that industry are not aboriginal. They are mostly White people whose areas of expertise are in the fields of Anthropology and "Western Art."[2]

During my most recent visit to the WA Art Gallery I saw evidence of the fact that: “Today, aboriginal art is shown alongside modern works in leading national galleries in Australia, France, Germany and America…”[3] I was delighted to find paintings by Eileen Yaritja Stevens sitting alongside works by Robert Juniper and Aubrey Beardsley. I was especially transfixed by the pastels and large brush strokes used by Sally Gabori in her painting “Thundi”. I stopped in front of the canvas for five minutes or more. I took out my iPhone and photographed it. I studied it up close, and marveled from afar. I thought it was utterly beautiful. I thought; I’d like that painting to decorate a wall in my 3 x 2 house in Vic Park. Despite the instant attraction I must also admit to Gabori’s painting challenging all my preconceived ideas about ‘aboriginal art’. It wasn’t until I inched closer to read the small descriptive panel beside “Thundi” that Gabori’s aboriginal roots were revealed to me. Her painting, to my (untrained eye), looked like any other work of modern art. I’m not sure what my surprise at the aboriginality of Gabori’s “Thundi” means for future perceptions of ‘aboriginal art’.  But I am certain that art galleries would do well to scatter works like “Thundi” throughout exhibition space, releasing ‘Indigenous Australian art’ from colonial shackles and ‘Aboriginal Art Exhibitions.’ Galleries and art dealers would do well to reconsider ‘Aboriginal Art’ as simply art. 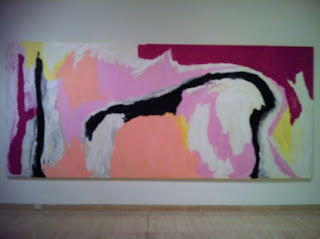